A 16 year old boy is brought into the ED by his friends after drinking some “tea” that one of his other friends had brought over. Shortly after drinking the tea, the boy became agitated and confused, speaking incoherently, and picking at his sweater repeatedly. He has no known past medical or psychiatric history. He takes no medications and his friends deny any other ingestions, alcohol use, or drug use.

On exam, the patient appears agitated and disoriented, has dry and flushed skin, dilated pupils bilaterally, and dry mucous membranes.

The friend brings a picture of the plant they used to make the tea (see below). 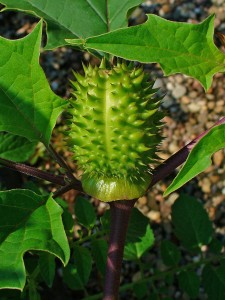 What toxidromes can be included in the differential diagnosis?
1. Anticholinergic:
–Dry as a bone, Red as a beet, Hot as a hare, Blind as a bat, Mad as a hatter, Stuffed as a pipe

*Note: Differentiate this from the sympathomimetic toxidrome by dry skin, urinary retention and absent bowel sounds

*Note: The skin may be dry if patient is dehydrated.

–Benzodiazepines (BZDs) and active cooling for hyperthermia and agitation. Consider physostigmine in cases of severe agitation, but avoid if there are cardiac conduction abnormalities or suspected TCA overdose, as this may cause cardiac arrest.
-Treat seizures with BZDs. Phenytoin is preferred for seizures with a clear anatomic focus, but has little efficacy in anticholinergic-induced seizures.
-Consider sodium bicarbonate if a wide complex tachycardia (QRS > 100 msec) is present.