A 32 year old male with a past medical history of hypertension and depression comes to the ED with a chief complaint of intermittent palpitations noticed over the past few weeks. He denies chest pain, shortness of breath, fever, chills, or other symptoms. The patient notes that he was started on a new medication for his depression about four weeks ago and thinks it might be responsible for his symptoms. He is currently taking HCTZ, losartan, fluoxetine, and ziprasidone. His review of systems is otherwise negative and his physical exam is non-focal.

CBC, BMP, and Troponin were WNL. CXR had no acute abnormalities. Initial ECG showed normal sinus rhythm with occasional PVCs and a prolonged QRS and QT interval, but no other abnormalities.

As you are looking over the initial ECG, the nurse hands you the following repeat ECG and yells to come into the room because the patient became unresponsive. 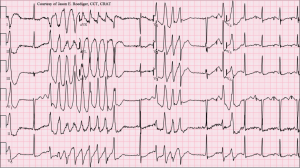